About us
About us»History
A+ A A- 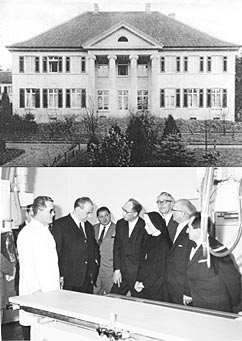 It all began with the “Krankenhaus für Gesellen” – "male patients," a facility in Rheydt dating back to 1847.

In 1883, the town of Rheydt purchased the five-acre land parcel "Ohler Feld" for RM 7,000.
At the time, the clinic had 250 beds, divided into a surgical unit, internal medicine and a paediatric clinic. Through 1968, it remained the only facility of its kind for both, the cities of Rheydt and Mönchengladbach. The first obstetric-gynaecological department was added in 1951, initially as a private women’s hospital.
However, the building was hopelessly outdated soon thereafter. An expansion was budgeted at DM 3 million  and even the erection of a new building was discussed.
In a public Rheydt city council meeting in 1957, a decision in favour of the construction of a new hospital was made. However, it soon became evident that the town would not be able to bear the anticipated costs on its own. Supreme city director Dr. Orth was able to bring on board the Ordensgemeinschaft der Schwestern der heiligen Elisabeth (St. Elizabethan Order) in Aachen to fund the construction.
The foundation stone celebration took place on 23rd November 1962 on the terrain of  "Villa Leiße."
Here, on a land parcel spanning around 86,000 square meters on the Hubertusstrasse, previously owned by Hubert Leiße, a textile entrepreneur, a 514-bed facility was to be built for the mind-boggling sum of around 50 million. At the time it was Germany’s most modern and expensive hospital.

Construction took more than four years. On 7th January 1967, the "Elisabeth-Krankenhaus-Rheydt" was ready for occupancy.
The facility boasted a department for internal medicine, surgical division, women’s clinic and a paediatric hospital, including a neonatal unit.
Over the years – keeping up with the extremely fast progress made in the medical field – additional disciplines were added. This included an efficient hospital pharmacy and two nursing schools.
In 1983, the honour of being named an academic teaching hospital by the RWTH Aachen was bestowed upon the facility.
The St. Elizabethan Order left the hospital in 2001. The town, and in particular the patients, received invaluable services from the Order for a total of 56 years.

The hospital’s name remains unchanged and our commitment continues.

x
Back to top